By now, you’ve all heard about – and have likely already registered for – the Milwaukee Running Festival, the inaugural event being held Oct. 30-Nov. 1. But did you know initial ideas for the three-day event were actually conceived back in 2006 – nearly a decade ago?!

Below, Chris Ponteri, Executive Director of Milwaukee Marathon Inc., tells us more about how the upcoming festival came to be. 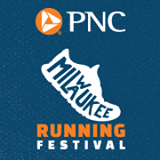 When and how did you get the idea of bringing a big-city race to Milwaukee?
The first time I ran what I would call a “big city” marathon was the San Francisco Marathon in 2006, and that is when I thought to myself “why doesn’t Milwaukee have an event like this?” I had run the Lakefront Marathon several times and, even though it is a first-class event, it lacks the “big city” pizzazz and really doesn’t capture the culture of our city at all. There are very few spectators and most people in Milwaukee have never heard of it or don’t know when it’s happening. I felt like Milwaukee needed to have an event like a marathon to showcase what a special city we have.

What about the idea appealed to you?
You can do some unique things with a 26.2-mile city course and there are also some neat ways to involve the entire community. Really, these are community events that are a reflection of our city. This event will definitely be a celebration of the City of Milwaukee.

What were some of the first steps toward making it happen?
Interestingly, I had wanted to start small and use the roads and parkways in the South Shore/Bay View area the first year (this idea later was the genesis of the Lake Michigan Trail Marathon). However, when I sent a courtesy email to the president of the Badgerland Striders about my plan, he responded in such a rude way that it motivated me to go big. So I started thinking about what it would take do a large-scale Milwaukee Marathon, and realized that I had the skills, experience and team to do it. The first person I approached was former Lakefront Marathon race director Kris Hinrichs, and when she said would support the idea, I knew it had a chance. She has many contacts in city government and throughout the Milwaukee area, and those have proven to be invaluable to me. Another key early partnering was with Hanson Dodge (the ad agency). They took a chance on me, coming on as a sponsor before I even had an event, and helped with the branding, which gave us a lot of credibility.

What can you tell us a bit about the planning that goes into a major event like this one?
Where do I begin? Let’s just say that my organizational skills are being tested every day. There are so many details – both major and minor – to worry about. For example, just today I have spent some time working on our Elite Runner and Athletes With Disabilities programs, meeting with a potential sponsor and printing out return address labels. The work is interesting, rewarding and challenging, but it requires a lot of list-making and other organization skills. I can’t think of the last night where I didn’t wake up at some point and think about a detail that needed to be addressed.

What type of feedback did you get from others along the way?
Almost everybody has welcomed this event with wide open arms. The most common reaction I get from people in the running community is “it’s about time Milwaukee has an event like this”.

What barriers have you had to overcome?
I can think of at least three times where I was close to giving up. I have received threats from individuals who were trying to protect their own events (I will leave out the details). One powerful alderman told me three times that he was against our idea before I eventually won his support. And then, as I’m sure many remember, there was the issue with Alderman Wade in front of the Public Works Committee that made national news when he scolded me for not being inclusive. Even though I didn’t care for his method of attack, I did take his concerns to heart and have used them to make the event better. He has since become a big supporter of what we are doing. We were also threatened with a lawsuit if we used the name Milwaukee Marathon so rather than risk going to court before our first event even took place, we changed the name to the Milwaukee Running Festival.

What was your reaction when the event was finally approved?
I don’t think I have really had a chance to celebrate yet. The approval process was so drawn out and incremental that it has taken awhile to sink in. I finally felt like it was official when I went to the City of Milwaukee’s annual birthday celebration last month and both the Mayor and Common Council President were eager to tell me how excited they were to be a part of the event.

How did your background in race planning and race directing help with getting the Milwaukee Running Festival off the ground?
First, it gave me some credibility since I could say I have directed other races in the Milwaukee area. Second, and more importantly, my past race directing experiences have given me so many great connections, which was vital to assembling a first-class team like I have done. We have a real “who’s who” from the Milwaukee running community on our team, and all are dedicated to making this a world-class running event.

Thanks for chatting with us, Chris! If you’re interested in learning more about the story behind the Milwaukee Running Festival, Chris is speaking at the upcoming Milwaukee Running Expo on Saturday, April 11 at 11:30am at Fleet Feet Brookfield.

To learn more about the Milwaukee Running Festival, or to register for one of the races, visit MilwaukeeRunningFestival.com.

If you’re already signed up for a Milwaukee Running Festival race, which distance are you doing?

One thought on “From the Beginning: How the Milwaukee Running Festival Got Its Start”